There is a long-standing relationship between the Fire Company and the Bird-in-Hand Corporation, which is owned by members of the Smucker family. The Smuckers have been a part of the Bird-in-Hand community for over 100 years, since they bought their farm east of the village in 1911.

As the Smuckers farmed their land, they developed close ties with their neighbors and became involved in community life by joining the Fire Company. Eighty-five-yearold John I. Smucker remembers leaving the farm chores as a young man to drive the engine to the fires. These family members served as Fire Company chiefs: Paul Smucker in 1972-1977 and Jerry Smucker in 1978 and 1982-1986.

In the late 2000s the Fire Company made a strategic shift in their approach to fundraising by seeking out a few large events instead of many small fundraisers. At the same time Bird-in-Hand Corporation wanted to use its land on the Smucker Homestead as an event venue. In June 2008 with the help of Jake King, Paul Stoltzfus and Elam Petersheim, they worked together to bring the Lancaster County Carriage and Antique Auction to the village. A successful partnership was formed with Bird-in-Hand, which provides the event site and also financial and technical assistance.

Many of the Smucker Family are avid runners, including Jim and John Smucker. In November 2010 Jim and John were instrumental in promoting and organizing the first Amish Country Bird-in-Hand Half Marathon. They also had the innovative idea to connect the race and the Fire Company. The event on the Homestead has evolved into the Run, Ride, and Soar weekend in early September, bringing thousands of people to the village. This has become a very profitable event for the Fire Company whose members serve as volunteers.

Bird-in-Hand and the Fire Company are committed to grow this event and make it more efficient. The emphasis is on friendly hospitality that creates an unforgettable experience in our picturesque community for the runners and other Guests.

John Smucker of the Bird-in-Hand Corporation explains the relationship, “We call on the Fire Company for protection and support and in return want to provide support and resources to them. As our business has experienced development and growth, the Fire Company has also developed into a professional organization. We appreciate that they are able to minimize damage when responding to a call for a company of our size. They reach for the appropriate techniques and tools. It is a sign of their level of training, sophisticated equipment, and their innovations and commitment.”

John also comments, “Our business is particularly interested in how the Fire Company is planning for its future in order to stay sustainable. Together we both share a strong vision for our community. And together we can accomplish our goals and make our community a good place to live and work.” 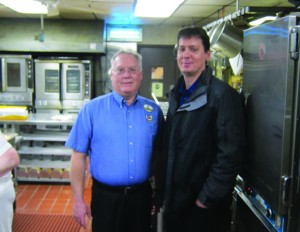 Bird-in-Hand Corporation provides the infrastructure for events. Darryl Hassler, Restaurant Operations Manager, consults with Fire Company Vice-President Paul Fisher. Together they offer the Friday evening Pasta Dinner on the Run, Ride, and Soar weekend under the big tent on the Smucker Homestead.