Dispatching Methods Change Over the Years

In order to call volunteers to a fire in the early days of firefighting in Bird-in-Hand, a townsperson ran to Frank Shirk’s shed on Railroad Avenue where the firefighting equipment was stored. There he pounded on a 36-inch circular toothless saw that was hanging in front of the shed. The noise alerted nearby firefighters that their services were needed.

Dispatching advanced to the point where a siren was activated from a home, store, or garage. Because their home at 398 Lynwood Road was close to the fire hall, Lloyd and Miriam Weaver would get the fire call at their home number. The Weavers had a button at their house that activated the siren on top of the old fire hall. Firefighter Lloyd left immediately for the fire leaving Miriam, who was often in her housecoat at night, to go to the fire hall and tell the responders where the fire was located. Later the Fire Company purchased a chalkboard and the location and type of fire were printed on it. Under that system, Dave Haldeman’s home was the second number to call.

Eventually the system was updated by using a more efficient base and remote station. Ben Stoltzfus was instrumental in getting the base for Zone 4 operating 24/7. For four and a half years (March 15, 1969-September 28, 1973), Ben and Ruth Stoltzfus and Jonas and Mim Miller served as the KGC-750 dispatchers for the nine companies and two ambulances in Zone 4 from their homes in Bird-in-Hand. Ben’s house had the radio with a remote at Jonas’ house. The new system utilized radio transmitters, allowing the alert to be broadcast to all volunteers at the same time. Under this greatly improved system, normal ambulance response time dropped from 30-40 minutes to 4-5 minutes.

According to Ruth Stoltzfus, this was a 24-hour job involving sleepless nights, inconveniences, and frustrations. In order to provide some relief, the two families took turns being on duty for two weeks at a time. Other volunteers helped out too.

During their four years of dispatching, the Stoltzfus and Miller families remembered these calls:

A memorable dispatch was to the Gap Fire Company. When the firefighters arrived at the designated spot, there was no fire in sight. They were told, “It’s coming.” Sure enough, the engine of an approaching train was on fire!

After the Lancaster County Fire Dispatch System began operation in September 1973, the Eastern Lancaster County Sertoma Club recognized the Stoltzfus and Miller families for their fire and ambulance dispatching service. Today Lancaster County-Wide Communications is the centralized answering point for 911 telephone calls originating from the 60 municipalities in Lancaster County. The center dispatches over 140 emergency agencies and departments from this one location.

In 2010 the Fire Company continues to maintain and improve a backup radio station in a radio room set up in the basement of the fire hall. It is a backup radio communication system for use in Zone 4 when Lancaster County- Wide Communications system (911) cannot operate due to natural or manmade disasters or when LCWC becomes overwhelmed. It is in essence a backup dispatch center for Lancaster County’s Zone 4. 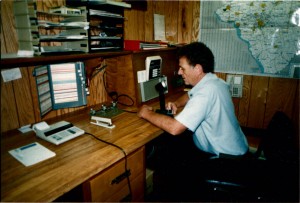